The TV transmitter we present today generates a stream containing four TV programs and broadcasts it on a frequency in the DTT standard . Ideal for stacking in an antenna system, audiovisual channels generated on-site or from other sources like a decoder for satellite television.
With this project you can make a small local TV station that has up to four TV channels. You can also integrate into a system into other existing TV signals that will be transmited on a desired RF channel. It’s ideal for exclusive cable installations for a condominium, a hotel, company premises or public place.
The transmitter is a modulator that converts up to four audio-visual content (with stereo hi-fi) in a stream for DTT digital terrestrial broadcast on a television RF channel. This channel is called multiplexer or transponder in DTT: is an old analog TV channel that now contains a number of digital television channels.
The product that we have realized merges 1 to 4 television channels in one stream of output that is ready to be transmitted on air (with the help of a linear RF) or injected in a localized cable TV circuit.
The stream is transported by a frequency corresponding to an RF TV channel. It has a width of 7 MHz if we operate in the VHF high band (III) or 8 MHz if broadcast in UHF (channels 21 to 69, that band IV and V ). Our device operates on all TV bands, given that the power is sufficient to drive the input stage of TV receivers, decoders, etc..
By entering into the video inputs the signals provided by few decoders or other sources (the audio is managed through to corresponding inputs) we will create a TV channel. This channel is then then mixed with the signal coming from the antenna. In this way we’ll have all the signals available in a single place without even the need for a decoder. 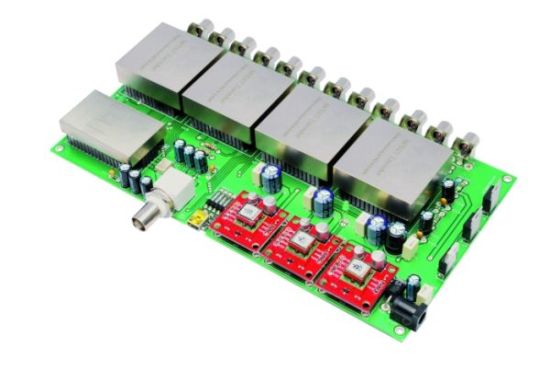 Again, in a hotel, a public space or a large company office, we can create a TV to broadcast locally, with audiovisual welcome or information (news, bulletins and technical data, lectures) generated by a computer or recorded live from cameras.
The Circuit
We use two modules: four MPEG-2 audio / video multiplexer and a DVB-T.
The circuit diagram is made of four encoders (U6, U7, U10, U11), each of which accepts its input as a mono or stereo audio signal and plus video signal (the one coming out of a video mixer, a camera, a DVD player or VCR) . These are later transmitted in radio frequency according to the DTT standard.
Each encoder is used to digitize the TV signals to MPEG-2 format to compress and send data to the multiplexer and modulator U8. Circuit is completed by six power supplies to provide voltage required for the operation of the encoder and multiplexer modules. Let’s see the voltages and currents that are needed to operate all stages of the circuit.
Let’s start by saying that all power supplies used in the transmitter receive the voltage from the plug (PWR in wiring diagram), which typically provides a 9 volt DC supply. The 5 volts for the analog circuit are derived from an integrated 7805 controller, which delivers about 200 milliamps (50 mA for each encoder); in this case, unlike the TX channel, an heat sink is needed for 7805. As for 3.3 volts and 1.8 volts for the analog sections those are obtained with two LM317. U4 provides 1.8 V intended for U8 and must deliver approximately 150 mA; the same applies to U5, that draws 3.3 V for the analog multiplexer.
For analog sections we preferred linear regulators in order to avoid problems caused by the switching pulse.
For digital power supplies we adopted three switching regulators (belonging to U1, U2 and U3) each constituted by a BOB09370 module ; each of these circuits is based on a DC / DC converter operates at 94% energy conversion efficiency and therefore dissipates very little heat even when fully loaded.
In our circuit, U1 (providing 3.3 V) delivers 2.6 Amps (2.2 A for U6 and U8 400 mA), U2 delivers 1.8 V in digital at 1700 mA (1200 mA for U6 and 500 for U8) and U3 (which provides the 1.2 V required for the “core” of the multiplexer) delivers 950 milliamps.