Here is an all-analog, all-through-hole, cheap & cheerful preamplifier for that perennial problem of getting the microphone amplification just right, which is a challenge not only with the faithful reproduction of lead vocals during concerts and recordings, but also with campfire and karaoke-ish performances specially when the beer takes hold. The two operational amplifiers of the circuit, IC1a and IC1b are contained in s single TLC272 package. The TLC272 was selected mainly for its low noise contribution, which is essential in a microphone (pre)amplifier as the original signal from the microphone is relatively weak (except for Matt Bellamy on his Muse concerts). IC1a operates as a non-inverting amplifier with the electret microphone signal applied to pin 3 via coupling capacitor C1, and the bias voltage applied to the microphone element via R3. IC1a’s amplification factor A is determined by the ratio of R8 to one of three combinations allowed by R4–R7. Let’s call that resistance, Req. At switch position ‘1’ i.e. with R5 switched into the circuit by S1, the factor will be:
Req = R4 || R5 || R7 = 449 Ω
A(1) = (1 + R8 / Req) = 223.7 ≡ 47 dB
Likewise with S1 at its center position a factor A(2) of about 14 (23 dB) is selected, and finally with R6 switched-in (S1 position 3) A(3) works out as 60 (35 dB). With selector S1 offering different gains, the circuit can be matched to different input levels, microphones, vocalists, and beer levels. 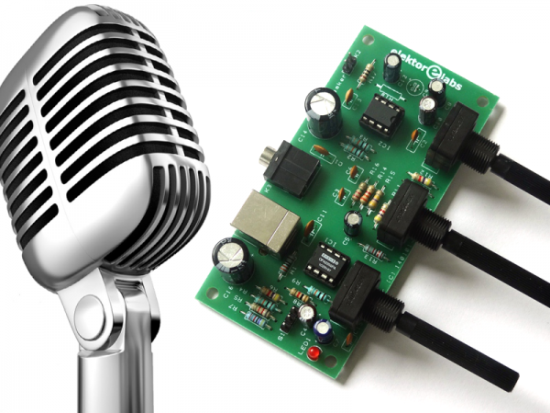 The tone control stage is arranged around the next opamp, IC1b. Here the ratio R16/ R15 sets the gain at about 18 dB. The effect of R14-C2 is, in principle, the same as R4 and C7: a smaller value of C2 increases the lower cutoff frequency. The real tone control however it the RC network inserted between IC1a and IC1b.
Read More: Kara Okay Microphone Amplifier