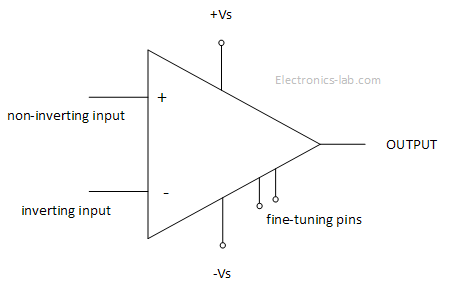 In this configuration a part of the output voltage is fed back to the inverting input and thus the gain of the OPAMP can be controlled and output isn’t saturating. The gain of such an amplifier is controlled by the two resistors Rf and Rin. The minus means that the output is inverted relative to input.
By adding more components on the feedback loop, different OPAMP circuits can be made, such voltage regulator circuits, current to voltage converters, oscillators, filters etc.
Beside the negative feedback, a positive feedback can be used. This way the OPAMP is driven toward saturation and works in either +Vs. or –Vs. output range. Applications of positive feedback is on comparator circuits and oscillators.
Read More: Introduction to OPAMPs and Applications