Inside the 74181 ALU chip: die photos and reverse engineering

What’s inside a TTL chip? To find out, I opened up a 74181 ALU chip, took high-resolution die photos, and reverse-engineered the chip.1 Inside I found several types of gates, implemented with interesting circuitry and unusual transistors. The 74181 was a popular chip in the 1970s used to perform calculations in the arithmetic-logic unit (ALU) of minicomputers. It is a moderately complex chip containing about 67 gates and 170 transistors3, implemented using fast and popular TTL (transistor-transistor logic) circuitry.
The 74181 die photo is below. (Click the image for a high-resolution version.) The golden stripes are the metal layer that interconnects the circuitry of the chip. (It’s not gold, just aluminum that looks golden from the lighting.) The white squares around the edge of the die are the pads that are connected by tiny bond wires to the external pins. Under the metal layer is the silicon that makes up the chip. Faint lines show the doped silicon regions that make up the transistors and resistors. While the chip may appear impossibly complex at first, with careful examination it is possible to understand how it works. 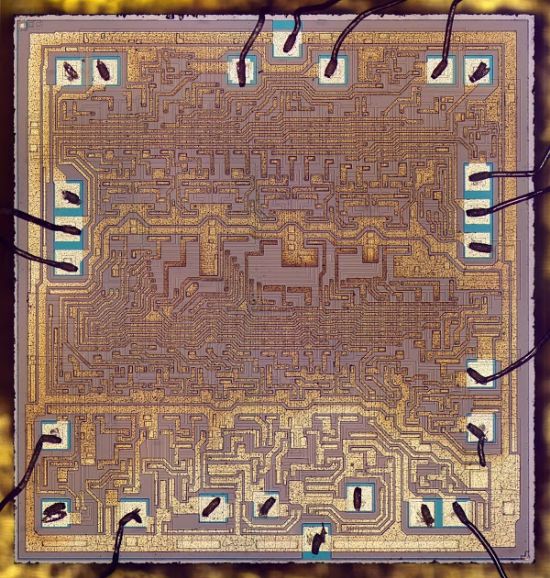 The 74181 chip is important because of its key role in minicomputer history. Before the microprocessor era, minicomputers built their processors from boards of individual chips. The arithmetic operations (addition, subtraction) and logical operations (AND, OR, XOR) were performed by the arithmetic/logic unit (ALU) in the processor. Early minicomputers built ALUs out of a large number of simple gates. But in March 1970, Texas Instruments introduced the 74181 Arithmetic / Logic Unit (ALU) chip, which put a full 4-bit ALU on one fast TTL chip.4 This chip provided 32 arithmetic5 and logic functions2, as well as fast carry lookahead.7 Using the 74181 chip simplified the design of a minicomputer processor and made it more compact, so it was used in many minicomputers. Computers using the 74181 ranged from the popular PDP-11 and NOVA minicomputers to the powerful VAX-11/780 to the Data point 2200 desktop computer. The 74181 is still used today in retro hacker projects.6

A brief guide to NPN transistors

The fundamental component of TTL logic is the inverter, and other gates are modifications of the inverter circuit. Thus, it’s important to understand the basic construction of the inverter, even though it is a bit complicated. I’ll explain how it works in an oversimplified way.9
The diagram below shows an inverter in the 74181 chip. The 5V and ground lines run vertically along the left, powering the inverter. The transistors are highlighted with boxes. The resistors are visible as long strips of doped silicon snaking around.11 An input pin (A0) is wired to the pad. On the right is the schematic for a TTL inverter10, with components highlighted to match the die photo.
The input is connected to transistor Q1 (red). This transistor is used in an unusual way, acting as a “current-steering” transistor. If the input is low, R1’s current is steered through Q1’s emitter to the input, leaving Q2 off. If the input is high, R1’s current flows “backwards” out Q1’s collector to Q2’s base, turning on Q2. Transistor Q2 (orange) can be considered a “phase splitter transistor”, which makes sure that exactly one of the output transistors (Q3 and Q4) is activated. (That is, they turn on in opposite phases.) If Q2 is off, R2 provides current to turn on Q3 (yellow), which pulls the output high. Meanwhile, R3 turns off Q4. On the other hand, if Q2 turns on, it provides enough current to turn on Q4 (green), which pulls the output low. I’ll explain the diodes in a footnote.12
Read more: Inside the 74181ALU chip: die photos and reverse engineering