Infrared (IR) can be used for line-of-sight communications over low to moderate range. IR is nice because of the lack of interference (except for sun and compact fluorescent lights) and freedom from FCC regulation. The web site http://tthheessiiss.wordpress.com/2009/08/05/dirt-cheap-wireless/ (Jacob Sikker Remin, 2009) shows how to use a IR remote control receiver and IR LED to send ASCII serial data in a simple, but unreliable, fashion with no error control, packetizing, or other overhead.
The transmitter drive uses a clever method to modulate and invert the serial output from the USART transmitter. The circuit is shown below. In my version, MCU timer 2 is used standalone to generate a 56 KHz square wave on pin D7. A lower resistor gives more range, but of course draws more current. The TSAL6400 can take 100 mA forward current, but the maximum current rating for any port pin of the MCU is 40 mA. You should probably limit the current to 30 mA. At 30 mA, the forward voltage drop of the diode is about 1.25 volts, so the the resistor (with two diodes in series) needs to be (2.5 volt)/(0.03 amp)> 83 ohms. 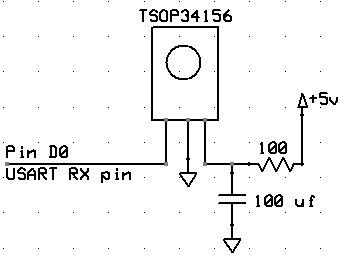 I improved Remin’s protocol by setting up the link software so that timing constraints on the IR receiver AGC were guaranteed to be met. It turns out that there are several types of IR reciever, some of which are better at short data bursts, while others are better for sustained data. I chose a Vishay TSOP34156 for its good sustained data characteristics, minimal burst timing requirements, and reasonable data rate. The system I build works solidly at 4800 baud over IR with 5 characters of overhead/packet (start token, transmitter number, 2 char checksum , end token). It works with increasing packet loss up to 9000 baud. The receiver circuit is shown to the left. The RC circuit acts a low-pass filter on the power to suppress spike noise and improve receiver performance. The RC circuit should be close to the receiver. The range with a 100 ohm resistor is at least 3 meters with the transmitter roughly pointing at the receiver, and a packet loss of less then 0.1 percent. To manage burst length limitations there is a short pause between characters, and only 7-bit characters are sent, with two stop bits. The 7-bit limit means that you can send all of the printing characters on the US keyboard, but no extended ASCII. All data is therefore sent as printable strings, NOT as raw hexadecimal.