For instructions for compiling the and using Infinite Noise TRNG driver, go to the software sub-directory, and read the README file there. Both Linux and Windows are supported.
The Infinite Noise TRNG is a USB key hardware true random number generator. It uses what I call a “Modular Entropy Multiplier” architecture (previously Infinite Noise Multiplier or Firebug). Besides being simple, low-cost, and fast, it is much easier to get right than other TRNGs. It naturally defends against influence from outside signals, such as radio interference and power supply noise, making it simple to build securely, without requiring an expert in analog design. Modular entropy multipliers produce a provable and easily measured level of entropy based on thermal noise, approximately equal to log2(K) per output bit, where K is a gain between 1 and 2 set by two resistors around an op-amp. A “health monitor” can track this and verify that the output entropy is within the expected range, which for the Infinite Noise TRNG described below is within 2% of log2(1.82).
Modular entropy multipliers are suitable for both board level implementation and ASIC implementation. Speed is limited by the speed of a gain stage and a comparator, and can run in excess of 100 Mbit/second per second with high performance components. Cheap solutions with CMOS quad op-amps can run at 8Mbit/second. 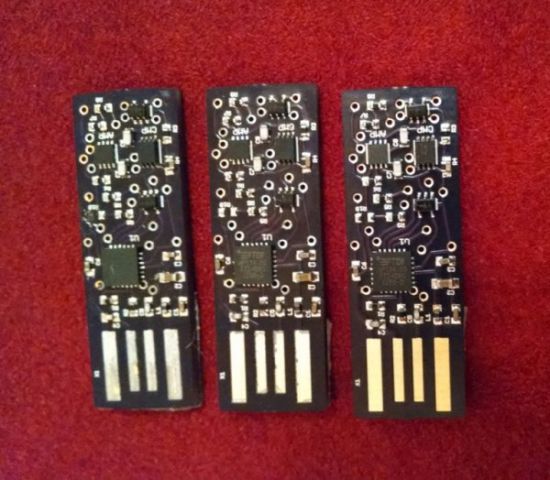 Adjacent bits from a modular entropy multiplier are correlated, so whitening is required before use in cryptography. This should be done by continually reseeding a cryptographically secure hash function such as SHA-512, Blake2b, Keccak-1600 (SHA3), or a stream cipher such as Cha Cha. This implementation uses Keccak-1600 with cryptographically secure reseeding of more than 400 bits of entropy at a time, overcoming a trickle in/out problem present in the Linux /dev./random system. Users who need many megabytes per second of data for use in cryptography can set the output Multiplier as high as they like, which causes Keccak to generate output Multiplier*256 bits per reseeding by the Infinite Noise TRNG.
The modular entropy multiplier architecture was invented by Peter Allan in 1999, which he called Firebug. I reinvented it in 2013. As usual, most of my good ideas are rediscoveries of existing ideas 🙂 Peter has his own version called the Redoubler, which is awesome. It really is the right way to generate random bits, whether on a board with standard parts, or on an custom chip.
With the aid of crowd funding, the Infinite Noise will soon be produced (again)! The campaign is driven by Manuel Domke, founder of a fresh electronics manufacturing company called 13-37.org electronics.
Read More: Infinite Noise True Random Number Generator