A retinal prosthesis substitutes for the photo-receptor cells of the defective retina. It’s composed of a camera carried in spectacles; electronics that processes the camera information; and a matrix of microscopic electrodes implanted in the eye in contact with the retina. These electrical signals are carried to the brain by the optic nerve. With such implants, totally blind patients can recover some visual perception in the form of spots of light called phosphine’s. Alas, these are not clear enough to recognize faces, read or move around.
To understand the limits of resolution of the prosthesis and the causes of deformation of the image it produces, the researchers carried out comprehensive experiments on rats, comparing the response of its visual system to natural visual stimuli (at left in the illustration) to that of the stimuli produced by the prosthesis (at right). 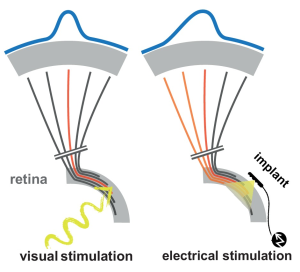 In studying the different positions, forms and intensities of the signal, they noted a large degree of electrical diffusion: a thin liquid layer between the electrodes and the retina passively diffused the electrical stimulus to neighboring nerve cells, resulting in a loss of precision (red lines and blue curve). With these conclusions, the researchers improved the properties of the prosthesis-retina interface with the help of specialists in the physics of interfaces. Together, they were able to limit the diffusion of the currents and significantly improve the artificial visual activation obtained from the prosthesis.
Conducted by researchers at the institute of neurosciences of Tim one, Université Aix-Marseille (CNRS/AMU) and of AP-HM, in collaboration with CEA-Leti, University of Grenoble Alpes; and the Institute for vision (CNRS/Inserm/UPMC),
Read More: Improvement in the resolution of Retinal Prostheses