it’s small but packed with features. The GSM alarm we present today, sports a PIR motion sensor, can be battery operated and it’s capable to communicate via GSM. It can transmit alarm conditions and receive commands from remote. It’s also capable to indicate problems such as is insufficient voltage supply or tampering.

It’s not so conventional for antitheft system: to integrate a movement sensor, a PIR motion sensor and a temperature probe in a single appliance: all this accompanied by an SMS sending GSM / GPRS module. This circuit was born as a very versatile, ready to use, built-in alarm system: no installation is required, you can just drop it and it’s ready to work. It’s not by chance that is designed to be battery operated: it also features a battery state control to check the power.
Moreover, it has two digital inputs, one which was is set up to detect tension: with it, you could detect important conditions such as the state of a protection system or even other parameters of various kinds, simply by adding additional sensors.
All is quite simple, since most of the tasks are managed by a PIC18F46K20 (U1), all is powered between 6 and 32 VDC (even unregulated), thanks to a DC / DC buck converter configuration that is present in the circuit. 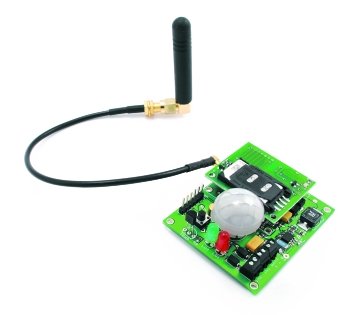 The switching regulator is based on the MC34063 (U2), used in the classical configuration of a winding inductance series PWM regulator, whose output voltage depends on the energy stored in L1, the output voltage from the DC / DC is stabilized with reference to the potential demoted to pin CII by the resistive divider R3/R4.
The two components are designed to get 4 V in C8 and C9.
After power-on-reset, the microcontroller, initializes its I/O settings: RB0 reads the state of the motion sensor, RB1 and RB2 serve to detect the logical condition in inputs IN1 and IN2; RB3 reads the state of the P1 button and RB4 the logical condition of the output of the passive infrared radar PIR. The latter normally has zero on OUT and 5-volt pulses when detects something in its field of action. P1 button serves for the local management of the operation mode.
Note that both IN1 and IN2 are protected by a diode which prevents the application to RB1 and RB2 of voltages exceeding that with which the microcontroller is powered. In the case of  PIC18F46K20, a voltage below 1 V or a short circuit of IN1 or IN2 corresponds to the low logic state, while the opening of said inputs or the application of a DC voltage of 1 to 5 V generates 1.
The AN0 line is an input assigned to the A / D converter contained in the microcontroller and reads the value of the voltage supply through the resistive divider formed by R1 and R2.