My lower-midrange Hubs an X4+ FPV drone got stuck in a tree in the middle of winter. We managed to knock it down a couple of months ago (the drone, not the tree), while there was still lots of snow to cushion the fall. After weathering the elements for over a month, it appeared to be mostly fine, except…one motor was seized. On the plus side – teardown excuse.

I confess this isn’t a full teardown. The 720p camera+ transmitter board is hidden under the main controller board, and while it wouldn’t be too big an effort to expose it, I seem to be getting cautious in my older age. This stuff is small, and probably not up to many disassembly/reassembly cycles. 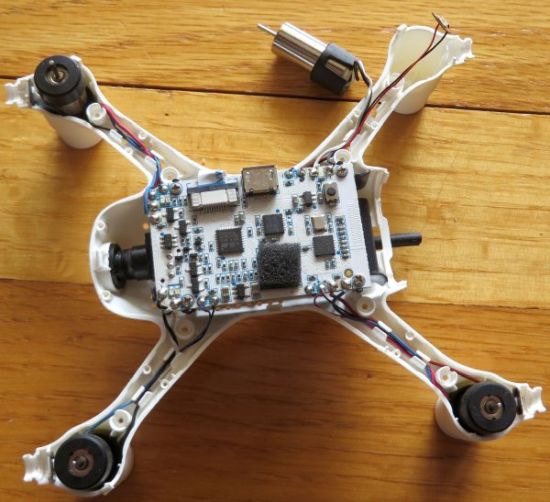 Figure 1  Drone, cover off. Yup, regular brushed DC motors. The video transmitter antenna is sticking out the rear of the drone (photo-right).

The main processor is an ST STM32F031K6, an ARM Cortex-M0 with the usual cadre of peripherals, as well as a motor-control block (the leftmost large chip in Figure 2). Although at the lower end of the ARM continuum, it’s doubtless more than powerful enough for this application. Amazing what $1 will buy you in a microcontroller these days.

The next major chip is an Invensense MPU-6050, which combines a three-axis gyro and accelerometer with onboard processing.

Chip #3 is labelled AMS29023, but I haven’t been able to find any information about it. Clearly though, it’s the 2.4 GHz RC receiver (the video transmitter uses 5.8 GHz).

I’ll wager the foam-covered part at the bottom of the board is a pressure sensor, as Hubs an claims height hold ability.

The ribbon cable at the top goes to the camera board, and to its right is a micro SD socket for saving video and stills.

The PCB vias look strange, but maybe they always look like that and you just don’t notice it when a darker solder mask is used.

As for repairing the motor, no amount of fondling nor banging about, nor following YouTube video instructions, could unseized it. Judging by the existence of numerous videos, and the availability of replacement motors, this is clearly not an uncommon failure. I’ll be ordering a few motors. And…I’ll finally attempt to read the semi-English instructions before flying again. The drone’s no Phantom, but hopefully it can be flown somewhat more reliably than what I’ve so far managed!

BTW, here’s my most interesting – if not smoothest – flight yet: