For a project of mine, I need to flash several hundred of ATMegas.
I use a special programming connector, which sits on the SMD chip and connects directly to the ISP and power pins on the chip.
My first attempt to ease the flashing process was to mount the programming connector to a lever with some additional weight on it. That way, once the connector was in place, I didn’t need to hold down the connector manually during the flashing process.

The PCBs come in panels of 40 (10 x 4 PCBs per panel) with milled slots in between each PCB. So to make the positioning of the PCBs under the connector a little easier (and more repeatable), I put two metal pins (with the same diameter as the milled slots) on the base of the lever.

The whole thing worked well so far, but since it takes [Update: after changing some default settings in avrdude, the time to flash a chip is down to 15 seconds…] to complete the flash process for each chip, it was still an annoying job to flash several hundreds of them: Position the next chip on the pins, lower the lever with the connector, start the flashing script, wait a minute for the flashing process to finish, lift the lever, position the next chip on the pins and so on… 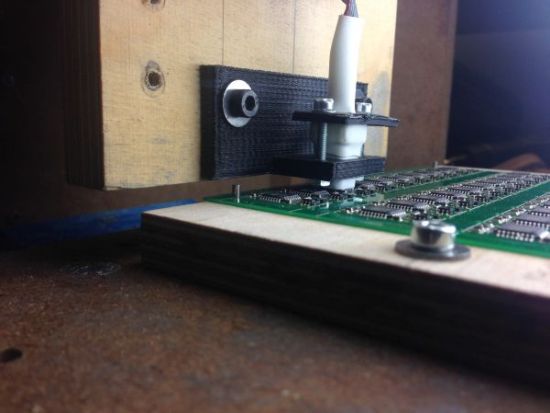 With the standardized PCB panels, a Pleasant Mill on hand and some custom coding, it should be possible to completely atomize this process, right?
After removing the spindle from the mill, I needed some kind of retainer for the -more or less- irregular shaped programming connector. The only regular shape on the connector is it’s square footprint (about 10x10mm) at it’s lower end. So I designed a simple bracket with mounting holes for the mill on its back and a square hole for the programming connector on its base. A clamp on top of the programming connector hold it in place when it is pressed onto the chip during the flashing process.