What’s that smell? It’s noxious gas of course! If you’re in an environment where there’s a possibility of gaseous release of which you’d rather not breathe, why not build an automatic system for sensing and alerting you? The design for the Environmental Alert System is driven by my motivation to understand the concentrations of different chemicals in the air. The unit consists of an array of four gas sensors (one each for methane, propane, carbon monoxide, and smoke) connected to an Intel Edison for wireless detection and alerting. While no substitute for a proper commercial chemical detection system, the EAS makes for a great weekend project!
Power
The entire system is powered from a 5V 3A power supply. Each of the four sensors draws upwards of 150 mA, the Edison around 500 mA, and the Dot Star LEDs (at full white brightness) up to 2400 mA. Since the Dot Star strip will never be fully
on or set to white, the 3 amp supply should work just fine. The entire system is switched on via a mini toggle switch. A single green LED is connected via a 330 ohm resistor to the 5V rail to show the power status.
Control
An Intel Edison runs the show for the Environmental Alert System. The Edison is mounted on an Arduino breakout board, which makes it easy to read the analog signals from the sensors and potentiometers. The Edison is connected to the 5V rail via a micro usb cable. The Edison has a built-in Wi-Fi radio, which allows it to connect to the internet without the need for any additional hardware. 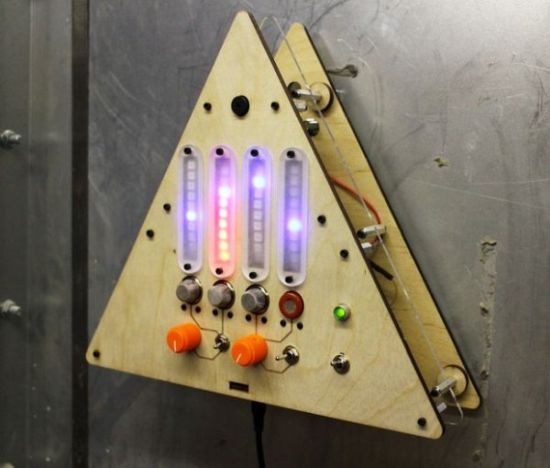 Sensors
The system has four sensors that connect the Edison. Each sensor is directly powered from the 5V rail and has its signal pin connected respectively to A0 through A3 on the Edison breakout board. The sensors also each have a sensitivity adjustment resistor; the MQ-7 has a 10K ohm resistor and the rest each have a 20K resistor. The MQ-2 is a combustible gas sensor (liquefied petroleum gas, propane, hydrogen, and methane) that outputs an analog voltage proportional to the concentration from 300 to 10,000 parts per million. The MQ-4 is a methane gas sensor and has a equivalent concentration to voltage response. The MQ-6 is an LPG, isobutene, propane sensor. The MQ-7 is a carbon-monoxide sensor.
User Input
There are two potentiometers and two toggle switches for user input. The toggle switches are connected between the digital pins on the Edison (pulled high via software) and allow selection between the two “threshold” adjustment potentiometers. The potentiometers are connected across the 5V rail and have their wipers connected to the remaining analog inputs on the Edison (A4 and A5).
User Feedback
The Edison connects and controls a single strip of Dot Star LEDs via SPI. Each strip is cut into four segments of 10 LEDs each and then connected in series to form a single strip, which makes for simpler software control. The system also has a buzzer for immediate auditory feedback if any of the sensors detects a value above the set threshold. The buzzer is connected to 5V and is controlled via a single NPN transistor that is driven by one of the Edison’s GPIO pins.