E-Mosquito takes sample of your Blood to Keep You Healthy

Mosquitoes are some of the most adept bloodsuckers on Earth. With a quick jab, sharp mouthparts plunge into human skin in search of a juicy blood vessel.
It’s no surprise, then, that bioengineers have used the pest as inspiration for a device to periodically and independently sample the blood of individuals with diabetes. Finger pricking, the most common method used today, can be a tedious and painful process, and many companies have raced to develop alternative approaches, including glucose sensor implants and semi-automated monitoring devices.
Enter the “e-Mosquito.” Since 2007, a team at the University of Calgary in Canada has been developing a fully autonomous, minimally invasive device that is pre-programmed to “bite” one’s skin at various times during the day to monitor blood glucose levels. They recently premiered their latest prototype, a watch-like device that taps into capillaries under the skin and deposits a drip of blood onto a glucose-testing strip. 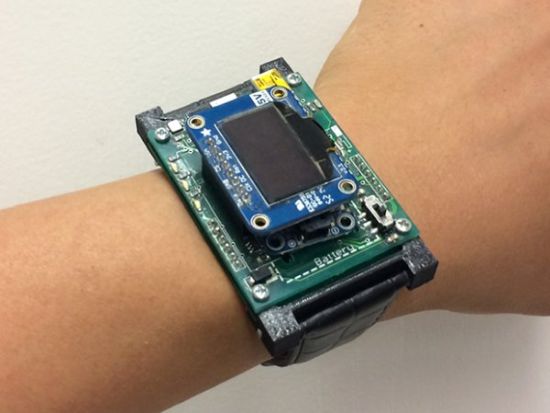 “The idea is to have periodic, spontaneous and autonomous biting resulting in reliable blood testing,” says Martin Mintchev, senior author on the project. “It’s a very significant step in demonstrating autonomous contact with the capillary.” In addition to monitoring blood glucose, Mintchev imagines the device someday being used to do other blood tests, such as genetic testing or cancer screening, from the comfort of one’s home.
Early versions of the device relied on piezoelectric actuators to pierce the skin with a needle, but those moving parts were expensive and bulky, so the first prototypes were roughly the size of a deck of cards—not something you’d want to wear on your wrist or arm.
Eventually, in collaboration with Orly Yadid-Pecht, an expert in compact microsystems at Calgary, the team switched to a shape memory alloy (SMA)-based actuator. This inexpensive composite metal contracts when heated, then re-forms into its original shape. When equipped with a small needle, the SMA-based actuators produced much greater penetration force into the skin than the bioelectric actuators and allowed the team to significantly miniaturize the device, says Mintchev.

Today, the prototype consists of two parts: a reusable watch-like top consisting of the battery, LED display, actuator and various other components, and a disposable bottom cartridge equipped with needle and test strip. The whole prototype is small enough to sit on the wrist and, more importantly, the penetrating needle reaches a capillary under the skin every single time, says Mintchev.
According to the authors, the “bite” doesn’t hurt. Mintchev and numerous volunteers report that the unanticipated, quick jabs are similar to being bitten by a mosquito you didn’t even know was there. The device can be pre-programmed to take samples at various times during the day and then wirelessly transmit the glucose results to a smartphone or doctor’s office.
Read More: E-Mosquito takes sample of your Blood to Keep You Healthy