Here’s the finished DAC! it was a very fun project and very fulfilling to make something that I actually use everyday. Overall the audio specs aren’t anything amazing, but it definitely is an improvement on the built in audio of my computer.

Another Shot of the Finished DAC

Pretty Blue Lights!!! There are two LED’s that light up when the DAC is plugged in, one signifying power from the USB bus and another when it has been detected by the computer.

Here is the electrical schematic of the DAC, it uses a Texas Instruments PCM2707 USB DAC Integrated Circuit. It identifies as a USB Audio Class 1.0 device so it doesn’t require any drivers to be downloaded for it to work in Windows and Mac OS X. The circuit is based off of the Application Example in the datasheet from TI, I added a couple indication LEDs to make it easy to tell if the device is powered and connected to a computer. I also added a Ferrite Bead on the USB 5V line to try and suppress any high frequency noise coming across on the 5V line. I created the schematic and PCB layout in Eagle, I’ve been using this program for a while now and it’s pretty easy to throw a board together.

After finishing up the schematic, I selected footprints for the parts. I tried to stick with mostly surface mount components since I’ve been trying to work on my soldering skillzzz. Most of the passive components (resistors, capacitors, ferrite beads) are 0805 in size. 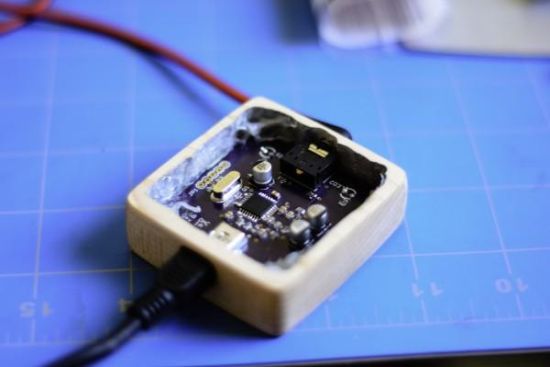 The PCM2707 is in a 32-TQFP package and I ended up making my own component and footprint in Eagle, I chose to use a SMD USB Mini-B connector and a through-hole Audio Jack since I happened to have these components already and wouldn’t have to order any.

The PCM2707 also has the ability to have buttons which control the volume, play/pause, and song skip on the computer it’s connected to. I don’t plan on using these at the moment, but decided to add a header connected to these pins in case I decided on implementing something in the future.

After I finished up the PCB, I ordered some from OSH Park (www.oshpark.com), these guys are awesome, I’ve used them for quite a couple of my hobby projects know and the boards are always awesome quality and it only takes a week or two to receive them. I ordered the PCM2707s from TI through their sample program and got the rest of the components through Dig key.
Here’s a view of the assembled PCB and the first case I tried to make. The PCB went together pretty well, my soldering job on the
PCM2707 was a little rough, but it worked when I plugged it in!! For the case, I had some 1 inch thick maple hanging around and thought it would make a pretty cool looking case. I didn’t get any pictures of the routing process, but I used my Dermal to hollow out a ~2inch by ~2inch square which fit the PCB quite well.