Skip to content
Digital control optimizes the efficiency, line, and load regulation of a DC-to-DC switching voltage regulator. Engineers are able to adapt the regulator’s closed-loop response, for example, to perfectly match the demands of their product.

However, digital control really comes into its own in a more complex system that comprises several regulators. The individual devices can be supervised by a centralized power system host control via a digital communications bus such as the standardized Power Management Bus (PM Bus). The host could be an IC dedicated to power system control, a general-purpose microcontroller, laptop computer with graphical user interface (GUI), or an ATE (used during the power supply or system testing process).
This article examines PM Bus, describes how it works, and identifies some of the digital power chips that have embraced the technology.
The basics
PM Bus is based on the System Management Bus (SM Bus) typically found in computer motherboards for communication with the power source. However, while SM Bus is designed for communication with low-bandwidth devices, PM Bus is targeted at digital management of power supplies, components, and power-related chips such as a rechargeable battery subsystem or temperature-, fan- and voltage-sensors and clock chips. 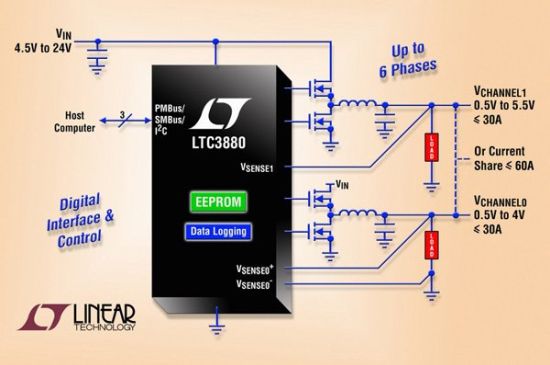 SM Bus itself was based on Inter-Integrated Circuit (I²C), the serial single-ended computer bus originally designed by Philips and used for attaching low-speed peripherals to a motherboard or other embedded system. As a result of this foundation, PM Bus is a relatively low speed, two-wire communications protocol. However, unlike SM Bus and I²C, PM Bus defines a substantial number of domain-specific commands rather than just detailing how to communicate using commands defined by the reader.
In March 2005, version 1.0 of the PM Bus specification was published. More recently a revised specification, version 1.2, was released. The standard is owned by the System Management Interface Forum (SM-IF) and is royalty-free.