It can be controlled through logic levels to set the speed and the direction of the rotation of CC brushed motors and stepper motors; outputs have LEDs indicating the rotation direction.
The circuit board we are presenting this time is based on the dual-bridge driver L298N, in a traditionally mounted version in a Multi watt container with 15 staggered pins; it has two terminal blocks for attaching to DC motors or the coils of a bipolar stepper motor and a terminal block for powering logics and motors. Each of the two output channels of the circuit can provide a maximum current of 2 A, which is enough to drive two 2 A direct current motors or a bipolar stepper motor absorbing 2 A per phase. 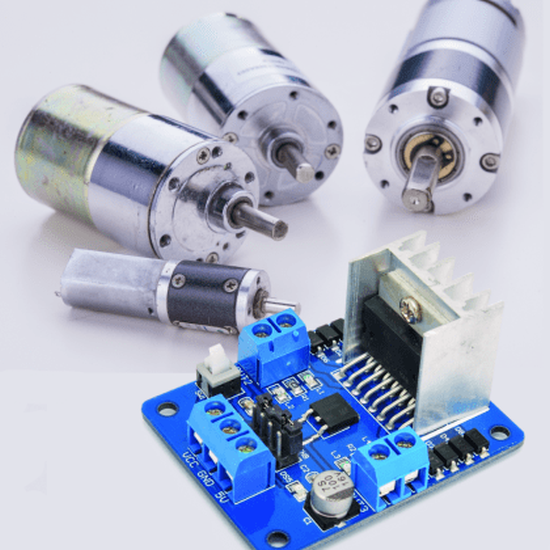 Now that you have an idea of the circuit performances, let’s get down to it by analyzing the circuit diagram, which is based on the L298N driver by ST: it is a dual H-bridge BJT driver which can be entirely controlled through the EN (enable) and IN (direction) control pins. Each section of this component is made of an NPN bipolar transistor bridge and each bridge is made of two halves in which the BJTs are connected following an almost complementary symmetry, that is the positive-connected transistor is connected to the collector and the bottom one is connected to ground via the emitter (the bridge structure can be seen in picture); therefore, the output is found between the emitter of the positive-connected transistor and the output of the ground-connected transistor.
The transistors bases of each half-bridge are individually piloted by the logic signals coming from the AND ports that have a common input and two separate inputs and are connected to the IC’s IN inputs; the common input is the EN and it activates the bridge so that it can receive the logic signals coming from the INs settings. This configuration allows us to both make use of the IC to pilot four brushed motors in one direction, and then use each half bridge separately, and to use one combined full bridge (by providing the IN control inputs with opposite logic levels) in order to control the rotation of one motor in one direction and the opposite.
In order to better understand the functioning of each single bridge, let’s take a look at the first one, which has 2-pin and 3-pin as outputs (OUT1 e OUT2) and let’s start from the condition in which the respective EN pin (ENA, that is the 6-pin), is at logic zero: in this case the bases of both sides of the bridge are at logical low and transistors are all in interdiction; outputs are in high impedance, this means that they do not conduct in either direction and do not supply current. Now we apply a logical high to the ENA, by applying a voltage of at least 5 V, the outputs of the four ANDs and the respective bridge now will enter into a condition which will depend on the control inputs IN1 (5-pin) and IN2 (7-pin); by applying a high logic level to both of them, the respective half bridge will show a logical high on its output. For instance, if we put 5-pin to logic 1, the positive-connected transistor will conduct and will determine a high voltage level on its output (OUT1), while the ground-connected transistor will be interdicted (because the AND controlling it has its input connected to negated IN1). Under this condition, if we leave IN2 to logical zero, its half bridge will stay with the interdicted upper transistor and the lower one in conduction, while if we also put IN2 to logical high, the OUT2 output will to go to logical high, that means the top transistor will be in conduction and the bottom transistor will be interdicted.
Read More: A DC Motor Controller with Control Leds