Summary:
The workmanship found in both soldering stations showed quality construction, soldering and manufacturing. I did not see any sloppy messy joints or poor workmanship. Most items were quality parts with the exception of the JWCO electrolytic capacitors in the CSI 75W.
For a device that was trying to save cost at any expense I found it strange that they did not use the internal oscillator in the microcontroller. I don’t see the point of having an external crystal running at 8 MHz when you could use an internal 8 MHz oscillator in such a design. If you’re not doing data communication and other high-speed tasks then an internal oscillator is more than accurate enough timekeeper. Maybe they needed this because they knew they were going to have to program and calibrate the microcontroller after production and the accurate timekeeping was necessary for the programming communications.
Also, the S3F8S19 microcontroller they used was able to store data in a small section of flash so why they needed or felt they needed an external EEPROM is a mystery to me. And when you’re trying to save costs why would you include an ICSP plug header or any other such unused connector when simple pogo pin pads would be just fine for after production code updates or calibrations. 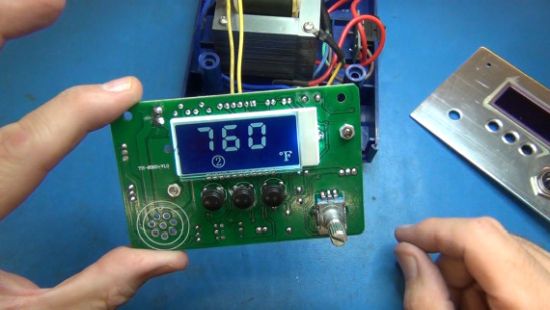 One last mystery was why they used an optical isolator IC for controlling the triac when these 600E triacs are designed to be controlled directly from a GPIO of any microcontroller. I just don’t see what the op to isolator is adding to this design that is necessary.
CSI Premier 75W Soldering Station Review
ISO-TIP solder iron review
Dri-Wick DE soldering Braid with Thumb Wheel Dispenser
G Chemicals 8341 No Clean Flux Paste
Datasheet (PDF) for the microcontroller in the CSI premier 75W soldering station – S3F8S19
Read More: CSI Premier 75W and Hakko 936 Solder Station Teardowns