Co Action Hero is an ARM Cortex-M3 microcontroller board with a built-in operating system (Co Action OS) delivering unprecedented power and ease-of-use to your electronics projects. It includes many of the features you find on Raspberry Pi but with the ease-of-use associated with Arduino.
Seamless OS Experience
Don’t let the OS scare you! The OS is pre-installed allowing you to create and install your applications without ever having to configure, modify, or install the OS. If you’ve never used an OS on a project like this, don’t worry. Creating applications is much like writing simple C/C++ programs on a normal computer. Even with minimal knowledge of programming, you will be creating amazing projects in no time.
In addition to the information here, you can find the software documentation, source codedownload, bug reporting, and tutorials on the Co Action OS website.
Kick starter Objective
The funds raised from this Kick starter project will allow us to build the first production run of the Co Action Hero. 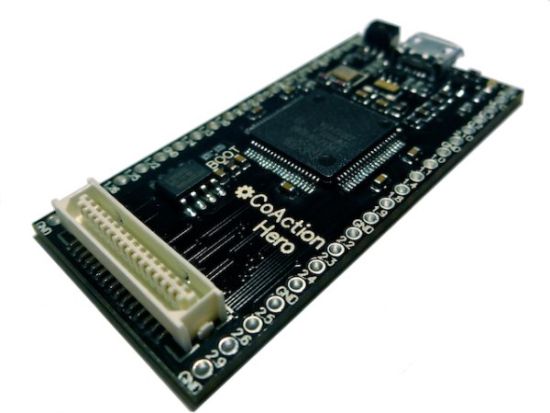 Co Action OS Ecosystem
Co Action OS is a complete hardware/firmware/software toolkit designed to deliver a powerful, easy-to-use development platform for both Windows and Mac OSX (iOS and Android coming soon).  The hardware includes the Co Action Hero microcontroller board as well as stackable blue tooth and LCD device boards.  The firmware is an embedded real-time operating system (RTOS) with easy-to-use hardware abstraction libraries.  The software includes Co Action OS Link as well as an SDK with sample applications to enable you to easily create your own desktop applications that communicate with your embedded project over a fast virtual serial port USB connection.
Hardware
The Co Action Hero features a powerful ARM Cortex-M3 processor (NXP’s LPC1759) running at up to 120MHz, a 1MB serial flash chip (which is used as a file system in Co Action OS), an expansion port, and micro USB connector.