Researchers at Stanford University have just invented a revolutionary way of communication. They are replacing the conventional way of wiring, wireless, radio and Bluetooth connectivity using chemicals that can be found in every house.
Nariman Farsad, now a postdoctoral fellow at Stanford, had built the first ever experimental chemical texting system in York University, which used vodka to send its messages.
While making research in the lab of Andrea Goldsmith, professor of electrical engineering, he and his fellow researchers have built a machine that sends messages using common chemicals. With the use of vinegar and glass cleaner, Farsad overcomes some hurdles he faced while sending data using vodka. In his vodka messaging machine, the signal would build up to the point that the receiving end was too saturated with vodka to receive more messages. Instead, easy to obtain chemicals like vinegar and glass cleaner could do better and plus these two specific liquids can cancel each other out at the receiving end of the system. 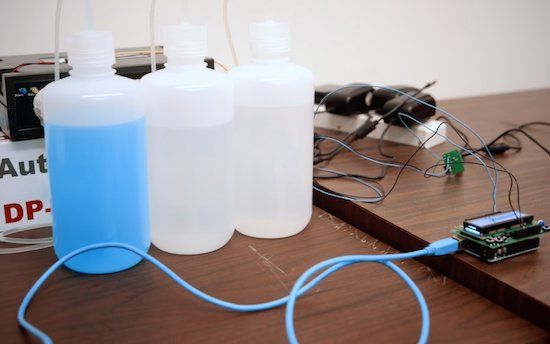 This system is extracting one and zero bits out of liquid since it sends pulses of acid (vinegar) or base (glass cleaner). After typing the message in a small computer, it will be send to a machine that pumps out the corresponding “bits” of chemicals, which travel through plastic tubes to a small container with a pH sensor. Changes in pH are then transmitted to a computer that deciphers the encoded message.
While working in Wireless Systems Laboratory, Goldsmith had faced a lot of challenges in her career in wireless communication and worked hard to overcome them, but now dealing with chemicals will be a new adventure for her and her research group without any previous best practices.

“Every problem that we’ve addressed in traditional wireless communications over the last three or four decades is really different now because it’s a different mode of communicating,” Goldsmith said. “As so, it opens up all of these new ways of thinking about the optimal way to design this type of communication system.”

Most of nanotechnology solutions that are out there are small in size, need power plus some wiring for connectivity, or depend on high frequency signals to operate, what would be harmful for body functions. This new chemical technology can be widely used in body-related sensors since chemical-based data exchange could be self-powered, traveling throughout the body harmlessly and can not be detected by outside devices.
Goldsmith and Farsad are now working in two directions, improving the current chemical texting system, and collaborating with two bioengineering groups at Stanford to make human body-friendly chemical messaging a reality.
Read More: Chemical Wireless Communication Without Electronics