How about a cheap serial terminal for less than a fiver all-in?
In a previous blog entry I’ve been working on more developments for the increasingly powerful home control system using an Arduino as a kind of universal I2c peripheral to the ESP8266. The reason for that is just the vast range of driver software our there and the fact that from China you can get an Arduino-Nano-type-board for under £2. There are drivers for just about everything so it seems daft to just ignore that. It ends up cheaper than most actual i2c peripheral boards.
First thing I had to do with the Arduino base code was increase the size of the buffer used for storing I2c and that is covered elsewhere – but finally I got that working. In the process that led me to the idea of a prototyping board with both the ESP8266, running the home control 2016 software AND a 328 to power some peripheral devices and give extra IO pins. 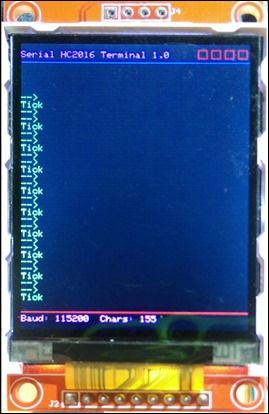 In the process of THAT I got the QDTECH boards running (128*160 LCD – cheap) – and that also is covered in a previous blog entry. These are great – and cheap (though not as cheap since Bang good jacked the price up but thankfully there is still Ali Express – thanks to Squonk for that particular link) but they are a little limited in terms of resolution as any kind of terminal. I even found a little bit of code to do vertical scrolling. Fast enough but then it is a low resolution display.
In the meantime however I pulled out another favorite display of mine, the ILI9340-driven displays at 320*240 – at £3.47 – mind you if you go to the Italian version of Ali express they seem to go down to just over £3. The increased resolution of these means you really COULD make a nice monitoring terminal but for one thing – speed.  I checked out several implementations including the Ada fruit ones and the drawing speed is atrocious – attempts to scroll the display are generally abysmal unless you use a fast processor.
And so it was that I stumbled on THIS article.  The funny thing is that this is on an Arduino site – but points to an article that is anything but Arduino –the fellow has written some FAST code to chuck out small text in the form of a (subset of a) VT-100-compatible terminal. But the code needed you to use the C++ compiler on the command line, NOT in the Arduino environment – and that was no good for me as I have to add other stuff. But if you take a look, you’ll see my late hours have been FAR from wasted.
In the picture on the right (depending on your screen) you see this terminal running – it has  2 fixed areas and a scrolling area and it is fast.
Read More: Cheap Serial Terminal