Rechargeable NiCd (nickel-cadmium) cells are widely used in consumer devices because of their high energy density, long life, and small self-discharge rate. As a part of one project, I needed to design a reliable and inexpensive charger for a battery pack containing two NiCd AA-size 1200-mAh cells. In the process of the charger design, I needed to solve two main problems: first, setting a proper charge-current value, and second, stopping the charging process when the cell is full to avoid overcharging. This Design Idea describes a way to overcome both problems.
Most NiCd cells can be charged at two significantly different charge currents: either a fast charge with a high current or an overnight charge with a low current. Regardless of the charge speed, a steady charge current should be provided to the cell during the charging, and more energy must be supplied to the cell than its rated capacity to compensate for the energy lost as heat. The cheapest and safest way to charge a NiCd cell is to charge at 10% of the rated capacity per hour for 16 hours. Thus, the 1200-mAh cell should be charged at 120 mA. This approach does not require an end-of-charge sensor and ensures a full charge. 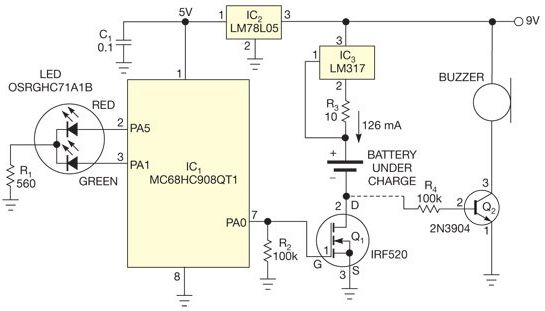 The charger schematic is shown in Figure 1 . The current regulator—IC3 ,an LM317—together with resistor R3 ,generates a constant charge current.R3 ’s value is calculated as 1.25V/120mA; the nearest standard value is 10Ω.The firmware of microcontroller IC1 performs all of the necessary functions: time delay for 16 hours and charger-status reporting via LEDs. The microcontroller program is straightforward. The assembler code can be found here .
Any kind of low-end microcontroller could be used in this project. This design uses the inexpensive, readily available eight-pin Motorola MC68HC908QT1 microcontroller. The bicolor OSRGHC71A1BLED from Op to Supply in dictates the state of the charger: Red means the cell is undercharge; green means the charge is completed. You can add a buzzer as an optional feature to provide an audio signal when charging is complete.