“Hello, hello. I am calling from a battery-free phone.” Vamsi Talla’s words in a cluttered lab at the University of Washington in Seattle are barely audible through pops and static. But the fact they can be heard at all, on a nearby Android smartphone, is revolutionary, because Talla’s own cell phone has no battery at all. It draws what little power it needs from thin air.
The prototype cell phone is the culmination of a years-long quest by Talla, a research associate at the lab of Joshua Smith, who researches computer science and electrical engineering at UW. “If you had to pick one device to make battery-free, what would you pick,” asks Smith. “A cell phone is one of the most useful objects there is. Now imagine if your battery ran out and you could still send texts and make calls.”
Realizing that vision required rethinking almost everything about how cell phones function today. In order to operate without a battery, the phone would have to rely only on energy that it could harvest from its surroundings. 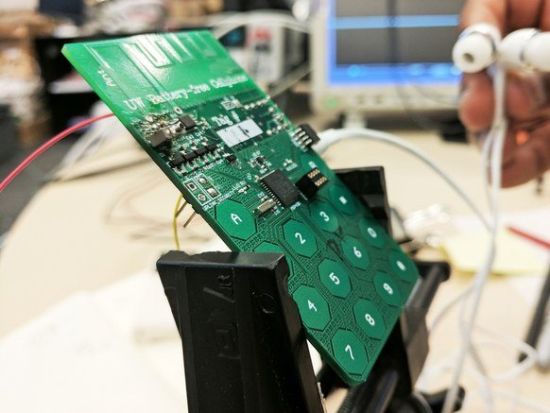 Ambient light can be turned into a trickle of electricity with solar panels or photodiodes. Radio-frequency TV and Wi-Fi broadcasts can be converted into energy using an antenna. A hybrid system using both technologies might generate a few tens of microwatts. The problem is that a traditional cell phone uses tens of thousands of times more power, around 800 milli watts, when making a call.

The first thing the team tackled was communication. Smith’s lab developed a technique called backscatter that allows a device to communicate by reflecting incoming radio waves, a bit like an injured hiker sending an SOS using the sun and a mirror. Smith has already spun out a start-up called Jeeva Wireless to commercialize what he calls “passive Wi-Fi”—digital backscatter technology for ultra-low power Wi-Fi gadgets. However, even passive Wi-Fi proved too power-hungry for the cell phone project.
“Converting analog human speech to digital signals consumes a lot of power,” says Talla. “If you can communicate using analog technology, you’re actually more power efficient.” So although the cell phone uses digital signals to dial numbers, the backscatter process for voice calls is purely analog.
While developing analog backscatter, Smith realized that he was essentially re-inventing a spy technology used during the Cold War. In 1945, the Soviets presented the American Ambassador in Moscow with a carving of the Great Seal of United States. Inside was hidden an audio bug that only activated when illuminated by the correct frequency of radio waves, using the energy of the waves themselves to operate.
Read More: Cell Phone Can Make Calls Without a Battery