Since 2013, the additive manufacturing startup Carbon had altered the 3D printing industry. Carbon produced its industry-changing M1 3D printer and CLIP 3D printing technology, bringing never-before-seen printing speed and end-use-quality polymer parts to the market.
Today Carbon is on a mission to help manufacturers and designers cut their costs, waste less energy and materials while speeding up the time it takes to get from concept to product on the market. The company released its ‘Speed Cell’ system, a new service aimed at contract manufacturers, and other high volume manufacturing businesses.
Speed Cell is a system of securely connected products designed to upend traditional methods of manufacturing. The first components of the Speed Cell include two new products that provide a powerful solution for additive manufacturing at scale: The M2 3D printer, and the Smart Part Washer.
The Carbon M2, with a build volume of 190 x 118 x 326 mm, is twice the size of the M1,  and it enables the printing of larger parts or more parts per build with the same 75 µm resolution and isotropic quality as Carbon’s pioneering M1 printer.
The Smart Part Washer is a novel machine that automatically cleans parts in a fast, repeatable, environmentally friendly and part-specific manner. 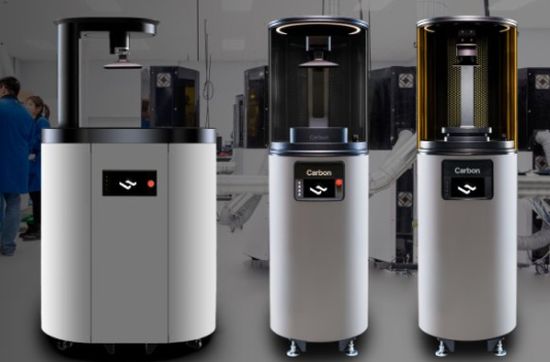 The Speed Cell was developed as a response to the needs of Carbon’s customers and strategic partners, including BMW Group and General Electric. Fast Radius, in partnership with UPS, are new Carbon customers and are among Carbon’s Speed Cell launch partners. Additional launch partners include Dinsmore and Associates, Sculpteo, Primary Manufacturing, and The Technology House.
Speed Cell is offered in two configurations:

or our customers, this means that their product development cycles no longer need to include the antiquated traditional manufacturing process steps of designing, prototyping, tooling, and then production. Instead, products can be designed and engineered on a platform that is also the means of production, eliminating prototyping and tooling steps. This dis-intermediation is at the core of Carbon’s role in accelerating the much-anticipated digital revolution in manufacturing.
According to Carbon, the combination of CLIP technology and the Speed Cell system allows for the production of previously impossible designs, such as complex assemblies combined into a single part, or lattices that can’t be produced by milling or molding. It also minimizes the tooling and prototyping stages of the design process and enables manufacturers to go directly to end-stage production.
Speed Cell is being marketed with the same subscription model that Carbon used for the M1, with prices as following for 3 years minimum term: