This article describes the development of touch sensing and switching techniques capacitive sensing technology. Products cited include both stand-alone capacitive sensing controller ICs and microcontrollers (MCUs) that include touch sensing as a peripheral function.
Capacitive touch sensing has experienced explosive growth to become the default human interface for several classes of consumer product. Users of tablets, smartphones, portable media players, and GPS systems now expect a sophisticated and responsive touch interface as a matter of course. This, in turn, has modified the expectations that the user base has of the smart device and domestic appliance markets; consumers now come, in effect, pre-programmed with the language of tap, drag, swipe, and pinch. High-end products that do not offer that mode of user interaction risk being “uncool”.
The launch of Windows 8 in 2012 served only to reinforce the proliferation of touch interfaces, prompting tablet and PC makers to experiment with new formats in the portable computing sector. 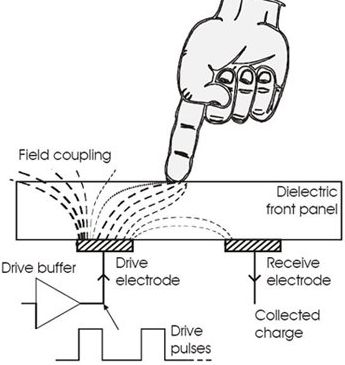 Those who viewed the touch phenomenon as evolving from the smartphone/digital assistant space regarded Microsoft’s Surface product as a relatively large screen format; yet other PC makers are testing the market with larger-format tablet-style products. Taking touch from the format in which it is the only interface – the smartphone – into a space where the keyboard has been indispensable, is likely to see further development in the way consumers interact with technology.