My cheap plug in hot glue gun died and looking for a replacement I found this: the Bosch Glue Pen
What does it do? it’s a hot glue gun for 7 mm glue sticks that warms up in 15 seconds. Charges via micro USB.
Much better than my old one that needed ~5 minutes to warm up for probably half a minute of gluing. I am very happy because of the fast warm up, wireless operation and small size. Battery should last 30 minutes and you get the low warning when there is 1/3 left, which I find enough.
You can grab one from Amazon.de or Amazon.fr or Amazon.uk or Amazon.it paying the same low price and helping support my website. 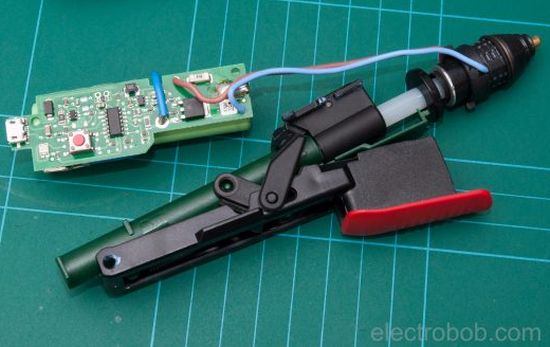 Two screws later
The whole “mechanism” detaches from the sides
Let’s look in more detail on the PCB
The whole thing is controlled by an ATTINY24A microcontroller.
On the left side next to the micro USB there is a charger circuit labeled ‘3303’. On the top of the micro there appears to be a NTC used to monitor the temperature during charging. The holes are probably there in case a through hole thermistor is used.
On the right side we can see the fuse and a IRF3711Z 6mΩ 20V HEXFET driving the heating element. At the glue melting end there is no temperature sensor, they are probably relying on the positive thermal coefficient of the heating element to achieve a rather stable temperature, as the manual quotes “approximately 170 °C”. Also there is a step up converter – used to generate ~12 V to drive the gate of the tranzistor, to keep it in the low ohmic region.
There does not appear to be any form of electronic temperature regulation – even after 3 minutes since I turned it ON the device maintains 12 V constantly at the gate of the tranzistor, no PWM or anything.
The wire going to the heating element is also connected to the micro, possibly to measure something, but what? Also the current through the battery while charging seems monitored by the micro as well, through the 0.22 Ω resistor next to the blue wire.
The battery is a 18650 made by Samsung, 1.5 Ah.
Checking the back of the PCB when…. what? Steinel? There appears to be a similar one.
The device charges via micro USB and does come with a 500 mA charger. While I can understand Bosch including one for comfort, for me this will go into the big pile of chargers that I might find some other purpose for.
Read More: Bosch glue pen teardown