For those of you who remember the eighties, this will no doubt bring back fond memories when every piece of audio equipment in the known universe was at the time equipped with a plethora of LEDs.
More specifically the ubiquitous Graphic Equalizer or ‘Graphic EQ’.
This Instruct able is centered around the MSGEQ7 to create a simple 2 Channel Graphic EQ (actually a simple spectrum analyzer) and documents my first, poor attempt at using the Arduino Uno R3, the Arduino development environment and coding in ‘C’ for well over a decade.
To make the above the circuit you require no tools, a basic knowledge of electronics and the following parts/libraries;

The circuit allows for the display of left and right audio channels. Seven of the columns of each 8×8 display represent a scaled analogue of the following frequency components present in the audio signal path at any transient in time. 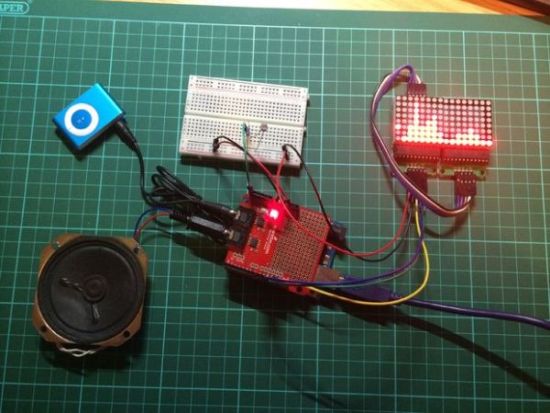 16kHz, 6.26kHz, 2.5kHz, 1kHz, 400Hz, 160Hz and 63Hz
The data sheet for the MSGEQ7 can be found here; https://www.sparkfun.com/datasheets/Components/General/MSGEQ7.pdf
The last column represents a rolling average value of all the frequency components.
Audio is supplied to the Spectrum Shield via either of the on board 3.5mm Jack sockets, the other socket is used to route this audio to a speaker.
The circuit diagram for the Spectrum Shield can be found here; http://dlnmh9ip6v2uc.cloudfront.net/datasheets/Dev/Arduino/Shields/SpectrumShield-v14.pdf
The LDR is used to programmatically dim the 8×8 LED Matrix displays if the ambient light level drops to allow better contrast for the viewer.

The above picture shows how to connect up the rest of the circuit to the Spectrum Shield and the two 8×8 LED matrices. There is a copy of the Arduino sketch used to drive the display attached below.

This bit is for the more experienced electronics enthusiast and requires some specialist tools, such as soldering iron, pliers, snips etc.
Now the software was working I tidied up the circuit and committed to a Vero board design which fitted neatly on top of the stacked Arduino Uno and Spectrum Shield pair.
Finally I modified the pins on the 8×8 LED Matrices such that they were perpendicular to the circuit board and would be a push fit into the 0.1″ pitch headers on the Vero board.
Detailed pictures above.

Step 3: Putting It All Together

The video above shows the fully assembled design using the Vero board assembly.

There are three tracks playing on the iPod.

Oh, and I forgot to mention. I shamelessly ripped some code to show the scrolling text at start up, though I did make some minor changes swapping row for column due to the 90 degree orientation of the displays.

Full copy of software attached below.

Read More: Back to the 1980s with the Graphic EQ