Skip to content
This sensor is very sensitive and can pick up electrical signals from anything that uses power. It displays the amount of interference it picks up by sequentially lighting 4 led’s one after the other. I have tested it all around the house and its been kinda fun to see how different things compare. It can also be used to follow house electrical wiring inside the walls, yes its that sensitive.

I used an Arduino Nano to program the At tiny 45 it was easy to setup and worked great. The code shown reads the analog input and uses that information to figure out how many led’s should be on if any. The values at which each led lights up are dependent on the antenna, its resistance to ground, and the attiny’s input sensitivity. These values will have to changed in the code to best match your personal setup. Sensitivity is adjusted by increasing or decreasing the resistance to ground on the antenna and by changing the led turn on values. 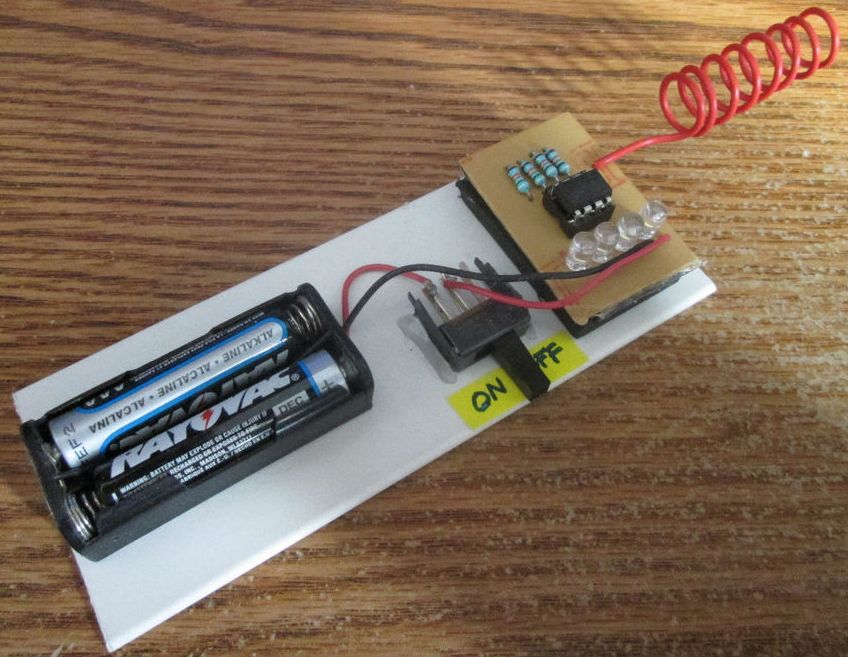 Start by connecting one of the At tiny 45’s analog inputs to the antenna then ground it using four 1 mega ohm resistors in series, after that wire the remaining outputs to light four led’s. I used a solid copper wire for the antenna and wrapped it around a marker to get the spring like coil.
Read More: Attiny45 EMF Sensor