UPDATE: Please note that there no relation between my app and the one with the same name that popped up on Google Play July 3. As for the name ANDRUINO there’s a good chance I might change it to avoid any confusion.
– July 7, 2013: I have completed a comprehensive round of testing and will be uploading the beta, with minor UI updates.
– July 4, 2013: Featured on Dangerous Prototypes  http://goo.gl/HZatN

ANDRUINO is a simple tool to help you control your Arduino (or clone) from your Android phone. It’s both an Android app and an Arduino program. Andruino has a simple Android user interface to 1) control Arduino’s digital and PWM pins 2)  send text commands to Arduino 3) and receive data from  Arduino over Bluetooth serial using the ever popular and really cheap (less than $10 from ebay) HC-05 Bluetooth over serial module or its siblings. 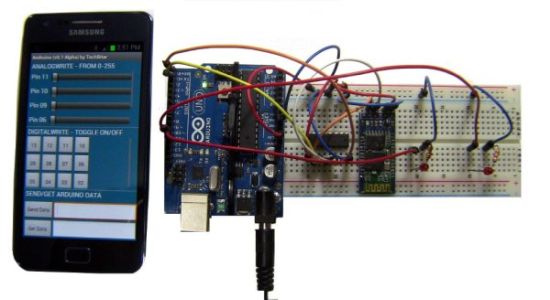 Andruino should work with other Bluetooth modules with some tweaking but I have only tested it with the HC-05. This is an alpha version that’s running fine on my Samsung Galaxy S2 Plus.  Please share your experience running Andruino on your phone. Also, while I used Arduino Uno in this prototype, feel free to experiment with other models of Arduino. Please share your experience to help me improve this  app.
I have published a guide before on building and programming a circuit with the HC-05 Bluetooth module and Arduino but I will briefly describe again in this guide how to wire the circuit using a breadboard and jumper wires.
Ardu Droid is an app that evolved during one of my development projects. Special thanks to engineer Jafar Quttaineh for testing the app and for his invaluable input.