The batteries inside our smartphones and laptops are fighting a losing battle when it comes to keeping these devices juiced up, but researchers from ETH Zurich have discovered a new type of glass material that could make a major difference: vanadate-borate glass. The glass can be used as an electrode material in lithium-ion batteries to almost double the amount of time they last between charges.
Scientists Semih Afyon and Reinhard Nesper are responsible for leading a the team of ETH researchers to the discovery, which has been several years in the making, and it could have a substantial impact in the way devices large and small are powered in the future.
Various challenges had to be overcome to find a material that could both store battery capacity effectively and take a frequent number of charge cycles, while staying stable enough to be viable for use in modern-day electronics. 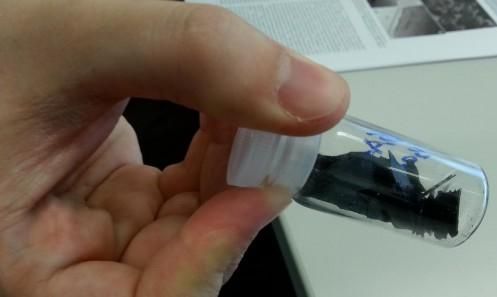 Chief among these challenges was to harness the potential of vanadium-based compounds, which can take more charge than materials currently used in cathodes, but become unstable after a few charge/discharge cycles because of their crystalline structure. To overcome this, the researchers mixed powdered vanadium pent oxide with borate compounds to create vanadate-borate glass – a material with a high capacity and stable structure that, according to Dr Afyon, is also simple and inexpensive to manufacture.

“What we need is new chemistry and novel compounds to obtain safe, better and longer-lasting batteries,” says Dr Afyon of the motivations behind the research. He added that the vanadate-borate glass compound his team has developed could extend smartphone battery life by 1.5 to 2 times and allow electric cars to travel 1.5 times further, though these numbers are still theoretical projections for now.

It’s not just gadgets that need better batteries, of course: the number of electric cars, boats and bikes in operation continues to grow, and it’s essential for the future sustainability of the planet that these vehicles are able to cope with the increasing demands being put on them. What’s more, wind farms and solar power plants need to be able to store generated electricity effectively for when it’s required, another purpose that vanadate-borate glass could potentially be used for.

Read More: A new type of glass could double your smartphone’s battery life