Sealed Lead Acid batteries are often used in amateur radio as a convenient power source for radios, since amateur radio equipment has standardized on 12.6V. The Cal Poly Amateur Radio Club enjoys a steady source of donations of slightly used SLAs, so I got a few of them with need for a battery charger.
Since the SLAs are relatively small, and I only need them charged between radio outings, I opted to build a 1A constant current charger, based on the 555 Battery Charger which won first place in the 555 Design Contest Utility category. Using a 555 is a rather clever way to get two comparators and a Set-Reset latch in a single 8DIP package, which is needed for the high and low trip points. The major difference between my design and Mike’s is that instead of using a relay like him, I use an LM317 as a constant current source to limit my batteries charge rate.
Mike’s design doesn’t need current limiting since he’s using it with limited power power supplies (solar panels and/or wind mills) and is charging a relatively large battery bank. Conversely, since I’m using a laptop power supply and charging relatively small batteries, I cared more about actively limiting the charge current. 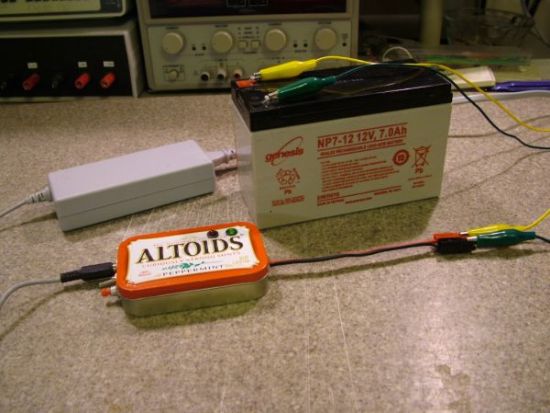 This charger only implements the constant current stage of your standard lead acid battery charge curve, since that is when most of a battery’s capacity is recharged and is much simpler to build than multi-stage controller logic. I appreciated the minimalism of only using a 555, where a three stage charge really only makes sense with a microcontroller.  If I did use a microcontroller, implementing all three stages of the charge cycle would be much easier: