PORTLAND, Ore. — Some day we may say good bye to expensive platinum in solar cells. Researchers at Michigan Technological University, in Houghton, Mich., have found that it’s possible to use a 3D graphene structure as a cheaper and more conductive alternative.
Graphene is by definition a flat, planar monolayer, but by combining it with sacrificial material that structures it into a honeycomb, a highly conductive material that could replace precious metals in solar cells results, according to Michigan Tech professor Yun Hang Hu.
“We have been able to make graphene into a 3D material that greatly increases its conductivity, making it suitable for replacing the platinum electrode in die-sensitized solar cells,” said Hu in an interview with EE Times. 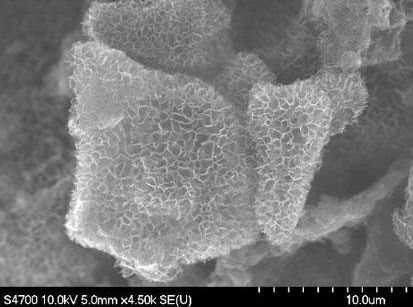 Hu’s 3D graphene was synthesized by combining lithium oxide and carbon monoxide, which results in a honeycomb of pure carbon filled with lithium carbonate that can be washed out with acid, leaving the 3D graphene.
To prove their material’s merit, Hu fashioned die-sensitized solar cells, replacing their costly platinum electrodes with 3D graphene. The resulting efficiency of the 3D graphene solar cell only dipped by 2.5 percent when compared to much more expensive die-sensitized solar cells containing platinum.
For the future, Hu is optimizing his solar cell designs to improve their efficiency, as well as developing new applications such as improving battery performance by using 3D graphene electrodes. His group is collaborating with another group for the application of 3D graphene into superconductors.
Hu performed the work with doctoral candidates Hui Wang at Michigan Tech and Franklin Tao of Notre Dame along with Dario Stacchiola, a chemist at Brookhaven National Laboratory, and professor Kai Sun of the University of Michigan. Funding was provided by the American Chemical Society Petroleum Research Fund and the National Science Foundation.